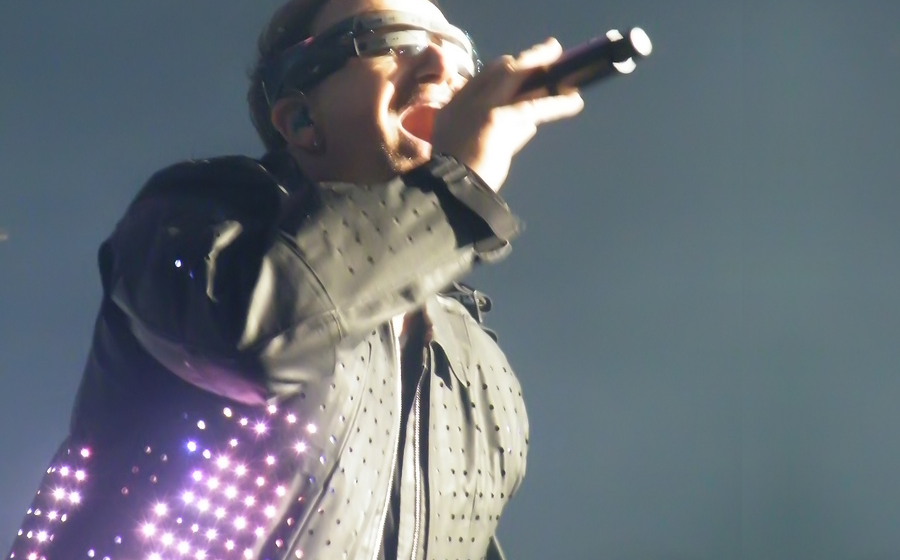 16 Apr Behind the Scenes, U2 World Tour

Posted at 16:14h in News by CUTECIRCUIT

For the first time an exclusive, behind-the-scenes look at the U2 collaboration with CuteCircuit.

Backstage… Bono gets ready, he tries on his new CuteCircuit Jacket and all he can say is “IT’S AMAZING!”. Out there- the set is dark. Only blue lights from the main platform are visible.

As the song begins with background voices Bono asks: “Is there a time?”, ”What do you want?”, “Is history bound to repeat itself?”.

And suddenly the lights change colour and as the music builds, out of the darkness each member of U2 materialises in sparkling blue lights, matching those of the stage. Zooropa hasn’t been played by the rock band for 15 years. It is an exceptional moment for the band and their fans.

For this dramatic moment, CuteCircuit has created outfits for each member of the band, each emitting a spectacular display of light. The legendary rock band from Dublin are wearing the most technically spectacular illuminated jackets ever created.

Each of them is hand assembled and embedded with over 5000 LEDS which can create any number of outstanding visual displays, patterns, and even video.

The jackets are all controlled wirelessly in realtime by the lighting masters backstage using “Q”, the live performance software for wearable technology by CuteCircuit.

Because each member of U2 has his own distinctive style, each jacket was created to match the unique style of each band member. Black waxed cotton for Bono, black leather for the Edge, white cotton for Larry, and a futuristic blend of leather and nylon for Adam.

The Zooropa chapter of each concert is set[/column_one_half][column_one_half_last] amongst neon signs of a brightly-lit futuristic city. These Jackets match to perfection the iconic stage designed by architect Mark Fisher, a spectacular “spaceship-on-four-legs” covered with video screens.

The overall effect with the CuteCircuit luminous jackets shows each of the four members with a dynamically changing illuminated surface moving over their bodies as they perform.

The four Jackets were used exclusively during the North American leg of the 360° Tour and were used for a number of songs in each performance including “City of Blinding Lights”, “Crazy”, “Sunday Bloody Sunday” and others.

Francesca and Ryan enjoyed this unforgettable collaboration and said “We are extremely proud of the effort, craftsmanship, design and technical achievement that went into the U2 jackets. We are very happy to be part of their Tour and the fact that our work has been appreciated by U2, their team, their fans including connoisseurs of music, design and fashion”.

CuteCircuit has done it again, they have pushed boundaries of fashion and technology to created something that has never been seen before in a live show.

Working backstage at the first concert of the North American Leg of the tour at Invesco Field, Denver, Colorado, Adam Clayton the bassist of U2 has his first experience with the jacket. Watching Ryan and Francesca prepare for the show he exclaimed “This is so cool!”

As Francesca recently described the event during CuteCircuit’s talk at TEDxSilkRoad “imagine 60000 people in a stadium all going -Wow!- at the same time, it was incredible!”.

“Zooropa… vorsprung durch technik (a step ahead through technology)

“Zooropa… be all that you can be”