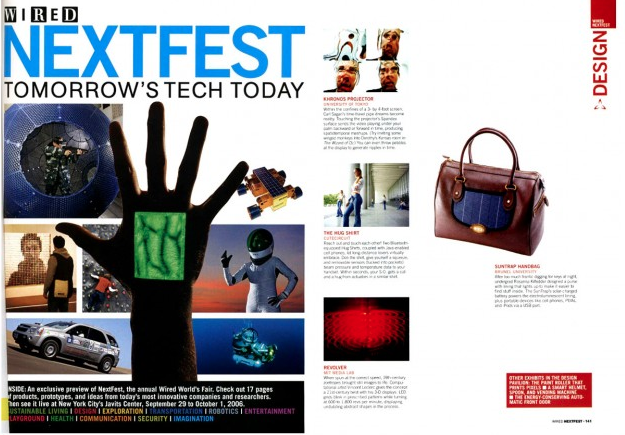 Posted at 13:05h in News by CUTECIRCUIT

CuteCircuit is very happy to have been selected to participate in WIRED NextFest 2006!

CuteCircuit will be in the Future of Design Pavillion exhibit number 400.
Come see us in New York! If you are a news-subscriber on this website you might even get a happy-friendly-pink gift: a CuteCircuit tee-shirt!

WIRED NextFest is a massive annual festival of innovation and technology. As they describe it: “WIRED’s vision of a new world’s fair, WIRED NextFest is a four-day festival of innovative products and technologies that are transforming our world. Patterned on the great World’s Fairs of the past, this year’s NextFest in New York features more than 130 interactive exhibits from leading scientists and researchers around the world.”

For media coverage of WIRED NextFest you can pick up the current (September 2006) issue of Wired magazine, see page 141 for CuteCircuit! and keep an eye on the Discovery Channel for a preview and timely coverage of all that is happening at the festival!